Reports should be written when emotions are still raw, legs still aching and feet still swollen. So while I'm not in the sharpest state mentally, here goes...

"The Legends Trail is a non-stop, unmarked race over 250km in the Southern part of Belgium during winter time. Competitors need to have a minimal average speed of 4km/h to finish the grueling course, with only 4 checkpoints, and around 7000D+." (www.legendstrail.com)

What an adventure it's been! As the experience and emotions from the past few days are still sinking in, so does the gratitude towards everyone involved for making this happen.
There's only so much you can do in preparing for an event like this. Obviously, you have to train physically. But more important could be the mental part. Reports of past editions are enormously helpful for this. Even those who I consider to be pioneers at ultra-running, seem to have been standing here, feeling equally impressed by the task at hand. After Great Escape and Bello Gallico last year, this will be my longest distance, adding 90k to the previous. The conditions are tougher as well, with fresh snow (which was a big help in navigating) and lots of icy parts (which had the advantage of low risk of trench-feet), so I felt really small when finding my way to Mormont. Looking around at the starting line, I recognise many people, all of which great runners or hikers, so now is my time to wonder what I'm doing here and whether I have a right to be standing here. I'm relieved when the group gets underway at 6pm and we begin the first section to Hotton. The first 25k or so follow more technical tracks along the Ourthe, which were very slippery at places. After only 9k, we see a group of people standing around Arnoud, who is tucked away in his survival bag after taking a nasty fall and breaking his leg. I stop briefly to ask if I can be of any assistance, leave my thermos with tea so he has something hot to drink, and continue, trying to lean forward a bit more and keeping my knees bent to sit low and more stable when running. Not the most relaxed running pose but better than the alternative.


Once out of the valley, the going got a bit easier. The clouds lift later in the night and I feel welcomed by the moon, which always gives me strength. It's hard not to think of it as a sign that tonight is a full moon. At 4AM I reach CP1, dry my feet, switch to sealskinz and have a nice meal. I planned on taking 1h breaks at every CP (except for CP3 where I would like to get some sleep), which seemed to be working for me. I was still feeling out of place, but from CP1 to CP2, I was joined by Martino, who is always good company and brightened my mood.

When arriving at CP2 I had some difficulty with the crowdedness of the place. Although I was really looking forward to arriving there, I felt I had to leave as soon as possible again, which felt pretty hard on me. I took care of the essentials and was out the door again in a pretty bad state, lacking the will to continue. So I did what makes most sense of all, call my girlfriend who is not into running and keeps a healthy distance from "all that running stuff you do". I don't recall the exact conversation, but after hanging up again, I started feeling better. And what would be most important in the end, I felt I was where I needed to be and I had the right to be here. Was I just lacking confidence until now? And did I need to admit I was halfway into Legends and things were actually going great? I started to feel I had a real chance of finishing this thing, even-though others told me earlier I could do this.
I had some encounters with other people along the way and teamed up for a section with Olivier, Paige, Johan and Pierre. Seeing the icy conditions at Ninglinspo, I was happy I didn't have to pass this section all alone in the middle of the night. Upon leaving the valley, I started feeling the pace of the group was somewhat different to my preferred pace, so I was off on my own again. 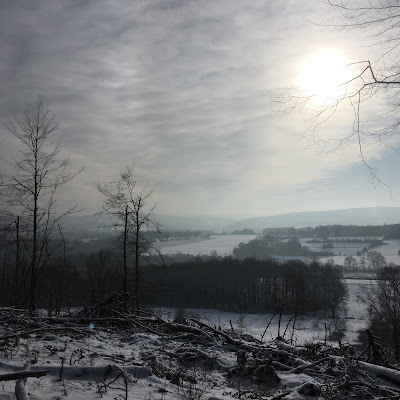 Near Nonceveux (133k) there was an unexpected and unofficial CP. Manned by legendary Sarah and Buzz and loving people like Dave, Imran and Chloe, this really pulled me through and gave me enough energy to get to CP3. More and more convinced I only needed to get there in time to get some sleep in order to finish, I was getting motivated.

The descent along Ninglinspo took longer than anticipated (who would have thought it was going to be slippery?) and I arrived at CP3 (163k) very sleepy and later than expected. But as my goal was to get some sleep during night-time I was just in time. I slept for 1,5 - 2 hours instead of the 3 hours I hoped for, and woke up again just before 7am feeling ready to get going again. Things weren't so simple however. My sleep-deprived mind wasn't cooperating in handling the basic logistics of sorting the drop bag. I kept looking for my dry socks in my drop bag, but I already put them next to my shoes. My sleeping bag didn't fit into the drop bag any more. I couldn't find my food for the next section because I already put it in my running pack... Anyway, I was getting really frustrated with myself and just wanted to get out in the fresh air again, so I'm afraid I wasn't too friendly towards the people helping me out (so sorry about that!). Once I was out, the cold air woke me up and I had a nice little cry-session which seems to be part of my ultra-experience. Everything seemed to fall into place and I started feeling better and better the further I got into the race, which was obviously the complete opposite of what I was expecting. Instead of a fresh start and a grim ending, the first 100k were pretty rough and the next 150 were good going.


I planned on going slower from CP3 onwards, but as I could keep up my pace from the previous sections I got more or less back on my schedule (even after a short nap out in the sunshine) when arriving at CP4 at 4pm. I didn't want to lose too much time there and take advantage of the remaining daylight, so after having hot food and a 5 minute nap (just to take the sharpness of), I got out again.

After sunset the wind picked up for a few hours, accompanied by some rain. Conditions got worse very quickly for a brief moment, and it was easy to imagine getting into trouble with core temperature if this change in weather would have kept on. I did put on an additional layer at CP4 before going into the night, and after putting on my hat and hood, I remember thinking this rain-jacket was actually really cozy! I was also thinking I could switch to my second pair of shoes at the next CP, but the next stop would be the finish line. I was doing this. I was finishing Legends. And I was enjoying it! Passing over Baraque Fraiture in snowy conditions was easier than during recce, and the people at Ingo's partytent filled me up with a tosti and soup to keep me going.
After almost 58 hours I got back at Mormont at Monday at 3:45, where I passed the finish line coming from the wrong direction. Leave it to me to create a socially awkward situation, even after 250k :D

As the Great Escape and Bello Gallico already proved to me, the community surrounding these events is simply amazing. At each CP you are showered with love and attention, everyone wants you to succeed and you are in safe hands. The only thing you need to do is put one foot before the other. Several times.
It again felt really strange, being welcomed by a group of people after spending the last 150k more or less alone. It felt like I just got back from a different planet, and needed to find a way of communicating again. Looking back at this adventure, it is both my strength and weakness of my personality. On the one hand, I can go for miles and miles all by myself, enjoying the solitude on my own pace and drawing energy from within. I can be looking forward to the next CP with enormous anticipation, but re-connecting with people is sometimes very difficult. This can result in disappointments for myself, which almost proved too much at CP2. Contradictory enough, it was also people who got me out of that state of mind.
For me, Legends has little to do with running. It has everything to do with digging really deep and being curious what you can find at the bottom. Thank you for handing me a shovel and keeping the line secured.